Lower and upper respiratory tract infection can spread to other parts of the body and cause symptoms like headache and meningitis.

Suffering from headache or meningitis can be a sign that one is infected with Coronavirus. I will now tell a story about a 50 year old male who had these symptoms but was not diagnosed with coronavirus right away.

The doctors gave him some intravenous fluid and metoclopramide and this somewhat help get rid of headache. For his muscle tenderness they just injected him basically with some local anesthetic and they discharged him.

But that was not the end of his suffering he actually had one more emergency department visit and he was admitted to the Department of general medicine and he stayed there for 2 days and they did not know what is causing his symptoms.

On these consequent visits they assumed because the patient developed rash that he in fact has meningitis. It is the next stiffness and the rash long with headache that has confused the healthcare workers. 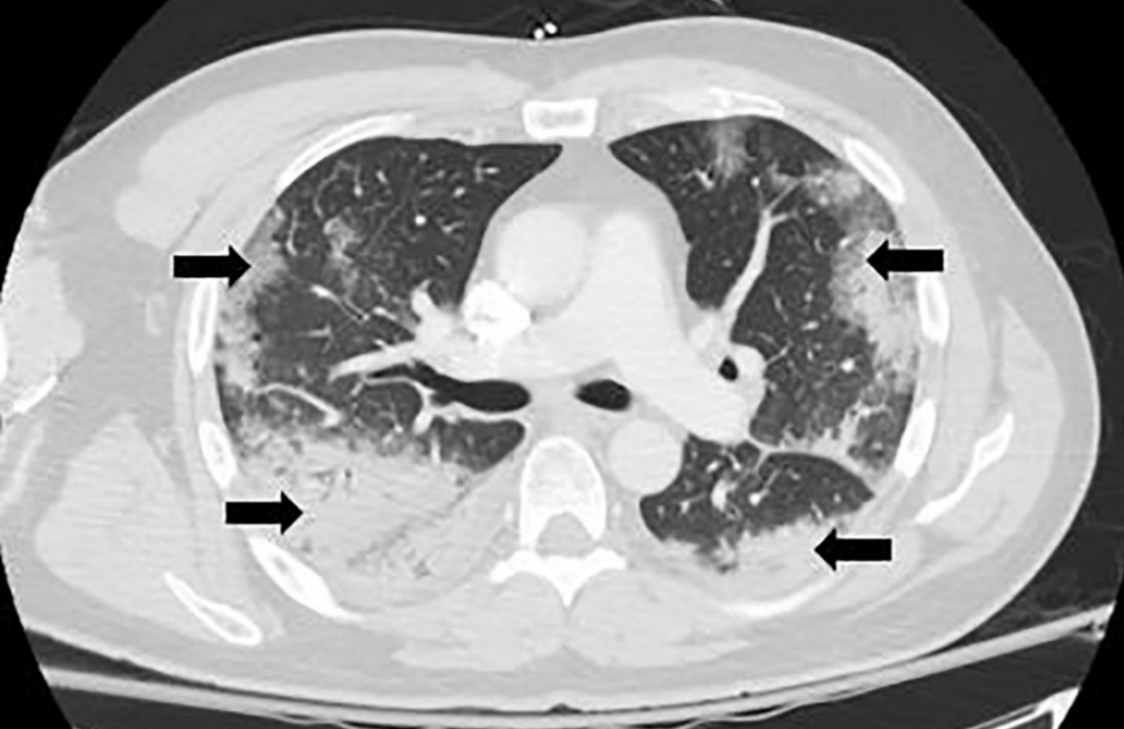 Pneumonia is basically an inflammation of the lungs and it can be caused by a whole variety of things. Inflammation can be caused by chemical substances aspiration of dangerous gases but also aspiration of a foreign body. Those cases are somewhat rare but bacterial and viral infection that cause the pneumonia are actually not rare. And that’s exactly what they should have thought of.

But they didn’t. They were treating him once at the emergency department the second time then they sent  him to the general medicine department.

In fact on his chest X-ray on the left done in the emergency department  if one looks carefully patchy infiltration was visible. And on the right side the progression these patchy opacities is clearly visible.

Now before I explain what happened to him, Many people have these symptoms and you can help me spread the word by

So maybe we can spread the word.

Now back to the story… It was only after these two repeated emergency department visits and the general department admission and all the unnecessary procedures and ultimately respiratory decompensation meaning that the patient had shortness of breath that they did a CT and X-ray scan. It only after a CT scan and x-ray were performed did they realize that actually they should test the patient for Coronavirus and the test came in positive.

You see why upper and lower respiratory tract infection can be deadly and in fact many people die because of pneumonia and especially in old age.

Firstly, there’s this so-called typical bacterial pneumonia that is presented with shivering and fever along with Sputum and loud breathing sounds.

Atypical pneumonia Usually caused by viruses has a slow onset, dry coughNo sputum and normal leukocytes values. However it can be detected on an X-ray and so it was his case.

He could have died as well but they saved him in the end.

If you need more help in information about symptoms, then go to  Symptomsky.com

There you can find experts and our software for symptoms.

If you are studying or teaching medicine then go to Anatomsky.com there you can find these animations and 3d models in software I made.

Our atlas was created with most careful artistic skills and was made personally by Fahrice Dozic and his co-workers. It reflects over 10 years of active work in anatomical field.

We worked hard on creating our 3D models and we have synced them with our lessons and atlas images.
We continue to improve them even today.

Any cookies that may not be particularly necessary for the website to function and is used specifically to collect user personal data via analytics, ads, other embedded contents are termed as non-necessary cookies. It is mandatory to procure user consent prior to running these cookies on your website.